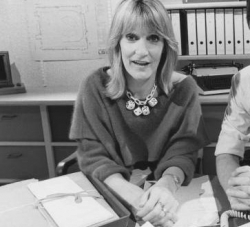 We were all very saddened to hear of the death of Lynn Faulds Wood , due to a stroke. Lynn was a good friend to the National Consumer Federation and a tireless advocate for consumer rights. Lynn chaired the British Standards Institution’s Consumer and Public Interest Network. In this role, she also represented consumer views on BSI’s Standards Policy and Strategy Committee.  She was a great champion of the consumer in the development and use of standards.

The consumer movement had two popular or should that be populist figureheads – Esther and Lynn. Rantzen and Faulds Wood both had the knack of creating campaigns that attracted not just the support of many but galvanised the people with the power to act, to intervene and change things for the better in the consumer interest.

I will always remember that West Coast (Helensburgh not California) drawl as she drew you in to hear the latest scandal or horror story. She had a genuine sense of indignation that the years could not dampen – things that struck the rest of us as ‘a pity and let’s move on’  sparked a campaigning instinct in her that both exposed crime and crook – she was physically very brave – and followed through to get things changed.

Whether it was a man with an axe exposed for the consumer criminal he was or kettles with too short  – or was it too long? – flexes, she brought a freshness and a sense of authentic anger and passion to issues that gathered support and promoted action. If Lynn was interested, then the topic was by definition interesting. If she said it was wrong and needed changing, that was what happened and we are not just talking faulty toasters but strongly defended areas of professional life like surgical process and practice.

I remember a Sunday afternoon walk with her and John and my then wife – they all worked in TV. I had been looking forward to a wine-fuelled occasion laced with TV gossip about who was seen leaving the BBC club with whom – we are talking a while ago – and was not at all prepared for the direction the conversation actually took – the detailed rundown on the state of her colon and the kind enquiries after the health of mine seasoned with spot on observations on the conservatism of clinicians. She and John were the impeccable media pair – both professional to the core and protective of each other’s reputation but looking to be bigger than the issue. Once Faulds Wood was on your case, beware. Her mannerisms made her the parodist’s dream but if that was the price of fame and a tribute to victories for the consumer, so be it.

Implacable but polite, confident in her case and cause but never self-important she illuminated the consumer cause and we all have reason – and more than one probably – to give thanks for her work and offer our heartfelt sympathies to John and her son Nick.